It's still a work in progress, and I'd like to make this an open effort, posting all the info, research, user interface, and the source code (later on).

A quick intro about myself. I've been working on computer graphics for too long now, and while I used to be a developer (15 years ago), I'm now mainly doing 3D content. I started evaluating the possibility of steroscopic domemaster images after I was asked by Terry Galloway at the Chabot Space and Science Center in CA to do some research.

I started with Daniel F. Ott Angular fisheye shader, and expanded (a lot) from there.
Daniel's shader can be found here, and it is also included in the DLL I will post soon.

This shader starts from the camera position, and creates two virual cameras (left and right, renderable one at a time) that rotate, constantly looking at the specific point of the dome matching the current rendered pixel.
The shader supports horizontal and vertical domes, and any degree of tilt in-between.

Here are two samples of Center, Left, and Right images, in vertical and horizontal mode.

It's not easy to see the differences here, but look below at the test stereo pairs.

The Center image would match Daniel's shader, but it has a different orientation, as I use some tricks to rotate the coordinate system 90 degrees. The current orientation matches the camera viewport, so it's extremely intuitive to setup the camera.

Of course, withouth some restrictions, this system will creates distortion points and areas where the 3D effect is wrong, reversed, or misaligned. The shader allows the use of maps to control the cameras separation (reduce or eliminate 3D effect), head rotation (force some areas to be looked with the head looking straight), and head tilt.

These are sample maps that I'm using for testing.

Using the Turn and Separation maps above, you can see what happens when rendering a simple grid (Red=Right, Green=Left). 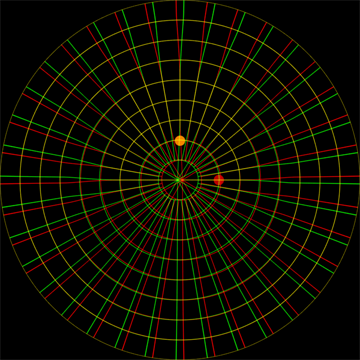 The image above is something I would consider for horizontal or slightly tilted domes, where above/behind the viewer head the 3D effect is eliminated to allow the top of the dome to be looked at without turning the head, and the back with fully turned head.

But maps can be used creatively to control any area of the dome. Here, the Turn map above is used in combination with a simple gradient as a Separation map to have 3D only in the front part of the dome. 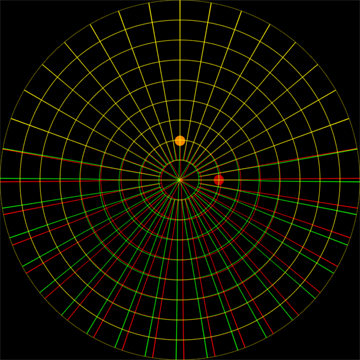 I think the math is almost there. The User Interface might need some adjustments, and maybe some automatic correction of distorted areas can be used instead of the maps, but the major issue now is to find a way to create proper maps.

Unfortunatley, I don't have any dome at home to try it, so I rely on simulated previews using a 3D concoction in 3ds Max, but that won't let me verify if the head tilt and rotation is set correctly. I think those values can be only found by experimentation on real domes.

These are some samples from the horizontal and verticals samples above. Relax (don't cross) your eyes to see the 3D effect. It helps is you are a bit shortsighted and take you glasses off :)

It's called "Indirect Diffuse(GI)", but I can't verify right now as i'm upgrading stuff here at the office. Might take a few days before I get Max 2017 back :(

Anyway, it should be part of the regular options. It's not a hidden feature.

Update... It's a simple "Use GPU" option in the "Indirect Diffuse(GI)" rollout.

The Domemaster3D installer supports the new mental ray for Maya 3.14 release, it has an option for installing the Vray for Max shaders, and you can also install Domemaster3D beta shaders that work with Arnold MtoA and C4DtoA.

The beta Vray for Maya lens shaders can be installed manually using the files placed in the C:\Program Files\Domemaster3D\vray\ folder.

The exciting new feature that mental ray 3.14 adds in Maya 2016/2017 is support for a feature called "ray differential" based texture sampling which is called "advanced elliptical filtering" when it is used on a Maya File texture node.

This little addition is a gem as advanced elliptical filtering means panoramic lens shaders like Domemaster3D no longer have blurry streak artifacts when the scenes are rendered in mental ray 3.14. 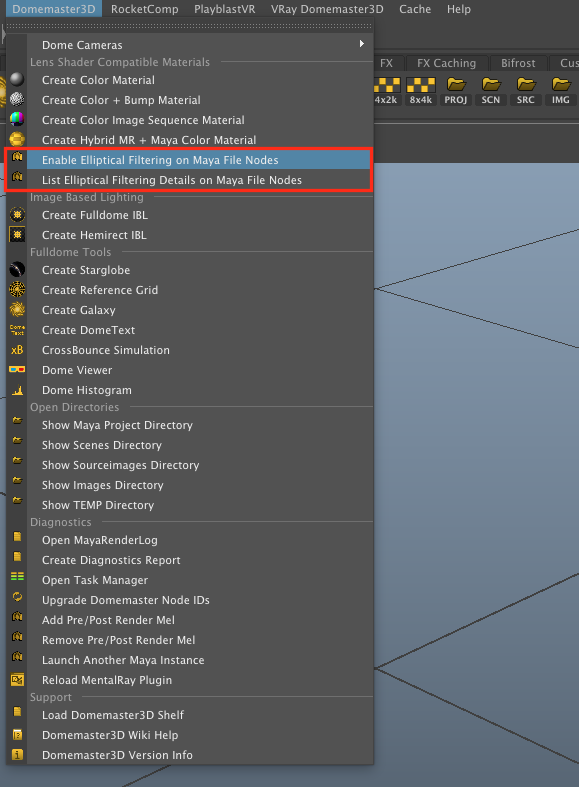 I have added a new Elliptical Filtering option to the Domemaster3D menu in the rendering menu set that makes it easy to toggle ON the ray differential elliptical filtering setting for all of the Maya file nodes in a scene which is quite a time saver when updating existing projects.

Jason Fletcher's "The Fulldome Blog" site mentions how to use the new elliptical filtering options in mental ray 3.14:


mental ray 3.14 for Maya can be downloaded from NVIDIA's website here:

For people who aren't updating to the new mental ray release I have added an example Maya project named "Domemaster3D_transparent_materials_project.zip" to the Domemaster3D/docs/Maya_Examples/ folder that presents a way to create transparency and alpha cutout effects using a legacy mentalrayTexture + mia_materials_x_passes kind of shading network. The Domemaster3D v2.2 release for Windows was compiled with Visual Studio 2012. If your system doesn't have the Visual Studio 2012 (VC++ 11.0) x64 redistributable package installed you can download it here: http://www.microsoft.com/en-us/download/details.aspx?id=30679

The Domemaster3D v2.2 for Vray release for Windows was compiled using Visual Studio 2013. If your system doesn't have the Visual Studio 2013 Visual C++ Redistributable Package installed you can download it here: https://www.microsoft.com/en-us/download/details.aspx?id=40784

At the end of the post is a neat section that shows a workflow that allows fulldome/VR artists to perform mental ray interactive viewport VR rendering directly in a Maya camera view.

Domemaster3D v2.2.1 has been released on GitHub. The V-Ray for Max lens shaders have been updated and the Maya DomeViewer tool now supports stereoscopic image viewing. 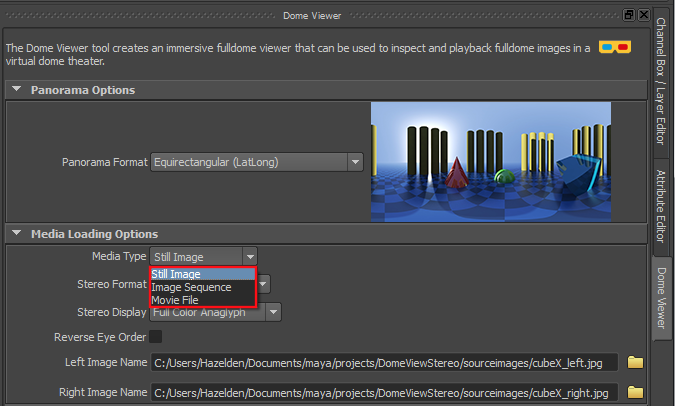 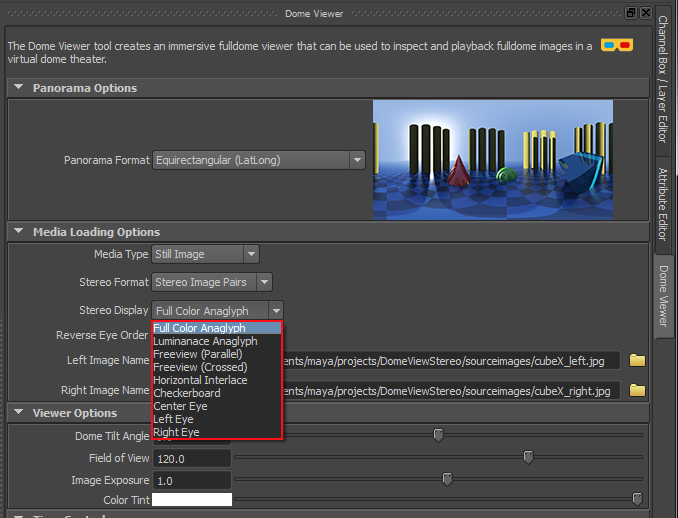 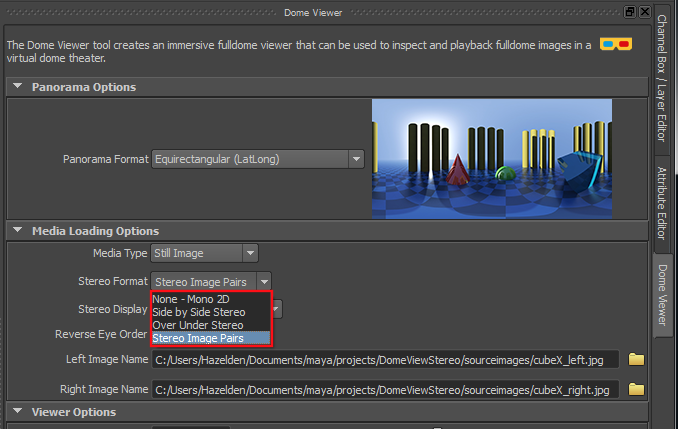 Updated the DomeViewer tool to add support for viewing stereoscopic 360° imagery. You can now set the Stereo Format control to "None - Mono 2D", "Side by Side Stereo", "Over Under Stereo", and "Stereo Image Pair". The Stereo Display control can be set to "Full Color Anaglyph", "Luminance Anaglyph", "Freeview (Parallel)", "Freeview (Crossed)", "Horizontal Interlace", "Checkerboard", "Center Eye", "Left Eye", and "Right Eye".

Started developing the Arnold MaxtoA for 3ds Max 2017 shaders by edited the metadata file to add a "max.category" entry for each of the shaders, and created custom Maxscript .ms based scripted controller files.

There is a new Domemaster3D v2.2.2 release out that adds Stereo 360 3D to DomeViewer, an interactive IPR viewport, Maya 2017 Workspace Control UI, and installer autodect logic.

This blog post goes over all of the improvements:
http://www.andrewhazelden.com/blog/2017/01/domemaster3d-v2-2-2-rele... 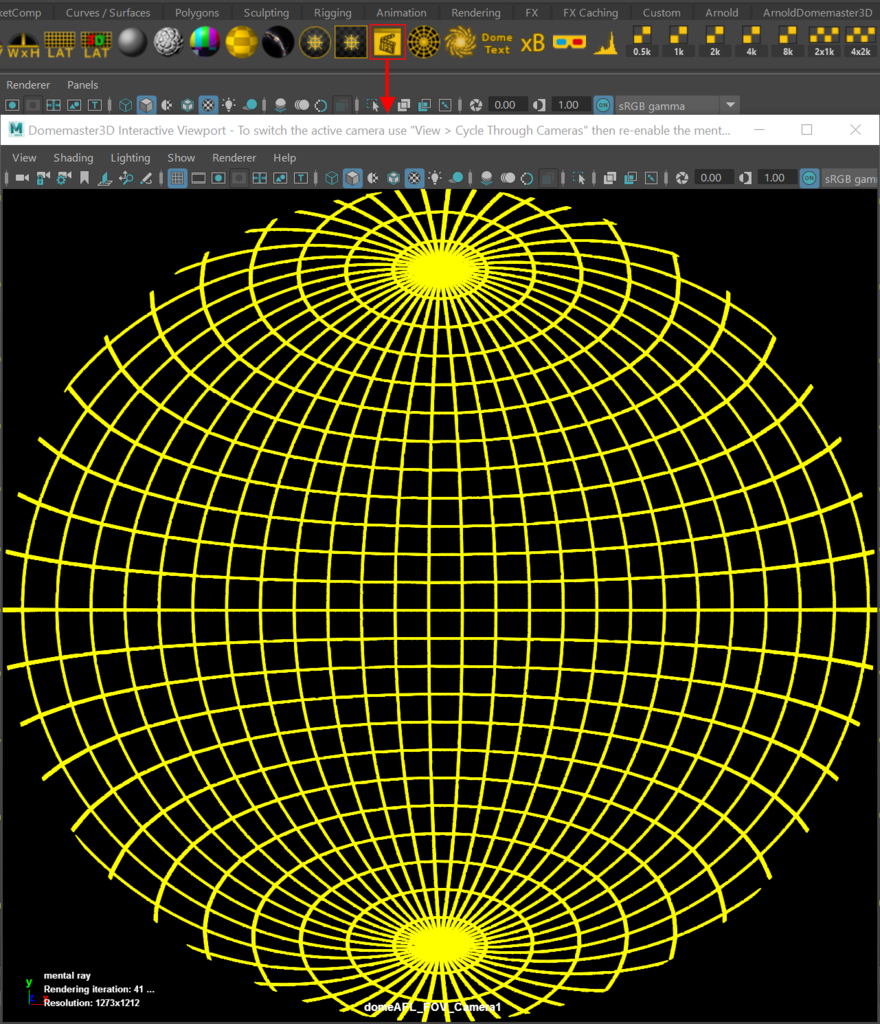 I’ve collaborated with Roberto Ziche on the development of the Domemaster3D suite of open source fulldome stereo and LatLong stereo production lens shaders for quite a few years now.

The DomeAFL_FOV_Stereo lens shader that Rob created was first released back in 2010. Since that time Rob and I ported the lens shaders to work in just about every single commercial 3D animation package that had an API for implementing a raytraced lens shader and the toolset has been used with the leading CPU based production renderers like V-Ray, Mental Ray, Maxwell Render, and Arnold.

This post has a copy of the README.md message that was added to the Domemaster3D project’s GitHub page to let users know about the end of support status of the Domemaster3D.

As life happens, both Andrew Hazelden and I (Roberto Ziche) need to move on and slow down the amount of the time we spend volunteering on the development of the Domemaster Stereo Shader. It was a nice project and had a surprisingly good adoption rate since my original experiment in mental ray ( http://www.robertoziche.com/domemaster/ ) back in 2010. And I have to thank Andrew for building an amazing Domemaster3D toolset around it, for regularly posting updates of the toolset with Windows/Linux/Mac based installer packages, and promoting it for all these years.

Since both the Domemaster and Latlong lens shaders still include some unique functionality for omni-directional stereo rendering that no one else provides at the moment, we are hoping that production users who need these tools going forward could join the GitHub project as a contributor to help pick up the development effort on creating bug fixes and to assist with the end user support especially for the stereo 3D planetarium production community that this toolset was designed for.

This is a summary of the project status:

We are always available for clarifications, basic support, and to facilitate people who want to join onto the Domemaster Stereo Shader project as a GitHub contributor and help take over the development efforts going forward.