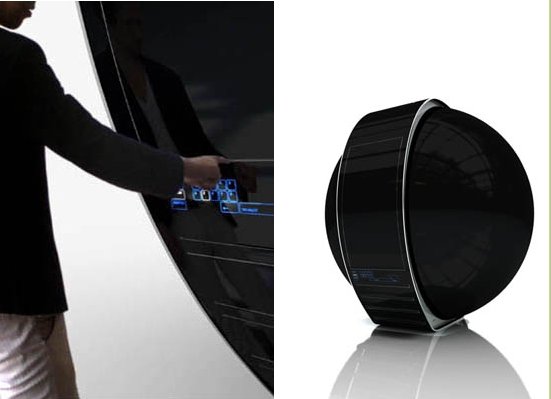 You Looking At Me? Scientists Develop Electronic-Eye Camera

Engineers John Rogers of the University of Illinois at Urbana-Champaign and Yonggang Huang of Northwestern University, Chicago have created an electronic eye-shaped camera that uses a new class of electronics technology that can conform to almost any shape of a human eye. The new retina-like camera sensor uses flexible photosensitive pixels.

Microsoft has a follow-up to their Surface table, and CNET has a couple of articles about the Sphere. I'm not sure how useful this will be. We already have considerable experience with Science on a Sphere. Even with four projectors and a 2 meter diameter sphere, there are clear limitations to how much detail you can see on a SoS. And although it's great for global… Continue

multi-touch and gesture interactions for a tiled display

The Electronic Visualization Laboratory (EVL) at the University of Illinois at Chicago has been awarded a major grant by the National Science Foundation to build their OmegaTable. This is a next generation version of their LambdaTable, which itself was an impressive 24 million pixel tiled display consisting of six LCD screens in a… Continue

I start by posting my video from IPS on my member page.
How's that for a charge of multimedial enjoyment!

Annie Lang, a professor in the Department of Telecommunications at Indiana University, has long been doing research to understand how people view and react to video stimuli. For instance in 1996, she, John Newhagen, and Byron Reeves wrote a paper showing that not only does negative content in news stories… Continue

Here's a patent for a new 3D volumetric display. What's cool about it is that it is not the volumetric display (which is not radically novel), but the haptic user interface allowing real-time hands-on manipulation of the virtual data.… Continue

given the intolerably busy schedules of everyone involved in fulldome-related obsessions, we're trying out this social network designed by none other than marc andreessen of mosaic and network fame. give it a go and let us know what you think...