Albedo Fulldome represented at the FullDome-Festival @ Zeiss-Planetarium Jena, 2014, with ¨ Climate Change - what future are we facing?¨ 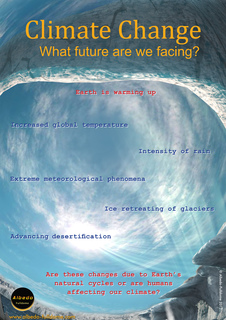 Albedo Fulldome is honored to be represented at the annual FullDome-Festival at the Zeiss-Planetarium Jena, 2014, with the fulldome film ¨ Climate Change - what future are we facing?¨.
About the film:
This show will entertain and educate with an easy-to-understand story about how our planet’s climate is changing. Through the immersive impact of fulldome, the viewer is plunged into a spectacular environment recreating landscapes and virtual scenes. From the examination of meteorological phenomena to the exploration of large natural spaces and weather conditions, fulldome provides a memorable way to learn about this highly topical and transcendent issue.
Learn more about it here (VIDEO): http://www.albedo-fulldome.com/drupal/en/climate_change
About the Festival:
The FullDome-Festival (22-24 May, Jena, Germany) is a key event for professionals and activists in the field of 360-degree immersive multimedia productions. The purpose of the Festival is to showcase recent fulldome productions and to provide an open platform to promote the art, the business and the future of fulldome. The Jena FullDome-Festival wants to encourage people from planetariums, fulldome theatres, universities, museums, creative artists, digital dancers, pioneers, vendors and visionaries to explore and embrace fulldome as an immersive art form, educational tool and mind altering experience for all the senses. Learn more about it here: http://fulldome-festival.de/

For more information on Albedo Fulldome and the film catalog, please visit www.albedo-fulldome.com