Antares presents a full preview of part one of Moles on line! 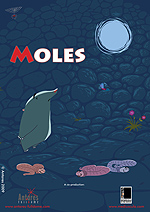 Antares FullDome Productions is happy to present the first part (18 min.) of the fulldome show ¨Moles – What is out there?¨!

¨Moles¨ consist of a total of two parts and the second part will be ready by the end of May, 2011 (the second part has duration of 17 minutes).Both parts can be shown separately as they tell independent stories with beginning and end and they can be shown together as a full 35 minutes length show.

Both parts are currently available in both English (US English) and Spanish (Castilian) and soon in other languages as well (depending on demand).

MOLES is addressed to boys and girls between the ages of 4 and 8. It is perfectly suited for school programs as well as for family showings.