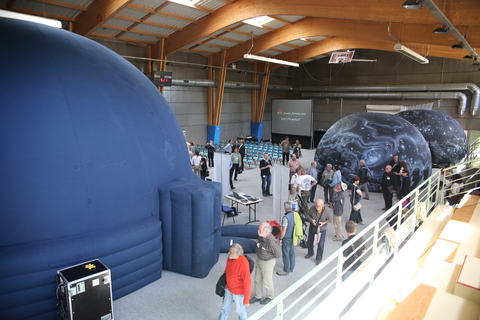 The APLF-conference, Association des Planétariums de Langue Française (Association of French Speaking Planetariums) was celebrated at the Center for Astronomy of St-Michel-l Observatory (France) from Thursday 9 to Sunday 12 May, 2013.

The conference was created to strengthen the links between the world of planetariums and professional astronomers, and also to develop and promote encounters and information exchange between between the two. APLF has currently 110 members representing 22 planetariums. At this annual meeting our distributor RSA Cosmos (http://www.rsacosmos.com/en/) was screening the French language version of the Albedo Fulldome production ¨Extrasolar Planets - discovering new worlds¨ that is due for release during the month of June this year, in their 9m in diameter portable dome.
For more information on this fulldome film, please visit, http://www.albedo-fulldome.com/drupal/en/node/166 or write Alexander Zaragoza at alex@albedo-fulldome.com