"I remember...being able to sail through the air with wondrous ease..." 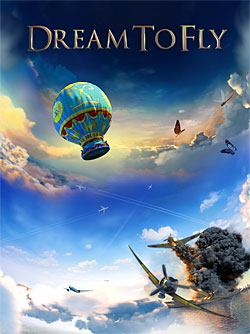 Have you ever dreamt you were flying? Just spreading out your arms and swooping through the air? Or flying a plane high above the ground and looking up at the heavens above?

That dream takes flight in an amazing new fulldome show called Dream To Fly -- a beautifully rendered story of aviation through the ages. It's an emotional, exceptional and unforgettable experience, easily one of the best fulldome presentations ever created. It takes audiences on an incredible journey through the history of flight, from the first generations of dreamers who imagined great flying machines to the dreamers of today who are building the star-faring machines of tomorrow.

Dream To Fly combines a rare combination of excellent writing, stunning visualizations, and narration by the gifted Polish actor Danuta Stenka. Her easily understandable English lends the show an evocative and exotic flavor. The show was produced by the Heavens of Copernicus planetarium at the Copernicus Science Centre in Warsaw, Poland. In pre-release screenings, it won the Directors Award at the Jena Fulldome Festival 2013, and the Best Script and Story Award at the Imiloa Fulldome Film Festival.

When I first saw it, I knew it was a major tour de force. I think it may become to fulldome movies what "To Fly!" was to IMAX in 1976 -- a breakthrough!

Dream To Fly belongs to a new vanguard of shows that expand the dome's horizons to embrace not only astronomy, but history, sciences, literature, art, and much more.

And now it's the latest addition to the Loch Ness Productions fulldome show distribution catalog. Read more, watch the trailer in HD, see full-length previews, and order online, all on our Web site!