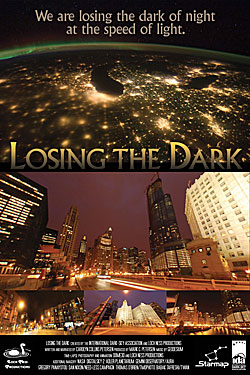 Loch Ness Productions and the International Dark-Sky Association are pleased to announce that their fulldome video about light pollution called "Losing the Dark" was awarded an Honorable Mention at the Fulldome Festival 2013, held in Jena, Germany at the Zeiss Planetarium. The film was also honored at a special showing on the festival's gala awards night, due to its timely environmental message.

"We are thrilled that our short film caught the attention of the judges at Jena," said Carolyn Collins Petersen, co-producer of the video and CEO of Loch Ness Productions."It means a great deal to have our work recognized by the jury and to have it showcased on the awards night."

"Losing the Dark" is a free video for use in fulldome and classic planetarium theaters, and in classrooms and lectures. It was released in February 2013, and is currently available in 7 languages, with 10 more in production. To date it has been a hit on YouTube, and has been downloaded by more than a hundred planetarium professionals, as well as countless educators and other science outreach professionals.

According to IDA's Scott Kardel, the video has reached more than 23,000 viewers on the organization's YouTube channel. "It is wonderful to see that the show's message is spreading," he said. "We're particularly pleased that the jury at the Jena Festival welcomed the show for its environmental message as well as its timely illustration of the problems of light pollution. We are honored, along with Loch Ness Productions, to see it recognized with an award."

"Losing the Dark" was produced by Loch Ness Productions, and funded by generous donations from Star-map.fr, the Fred Maytag Family Foundation, the International Planetarium Society, and members of the IDA. Fulldome theaters can get more information about getting the show at the Loch Ness Productions show web page (http://www.lochnessproductions.com/shows/ltd/ltd.html).  Educators and outreach professionals can find the show for download at the IDA's web page, and the IDA's Youtube channel. More information and links are available from IDA at http://darksky.org/losingthedark.

Jena's Fulldome Festival is a yearly event that gathers together fulldome film producers from around the world. The 2013 field of entries included 80 fulldome presentations from 17 countries, including professional videos, and a record number of student works from universities in Germany and the United States. Awards were given to 24 fulldome presentations at the Festival's Gala Awards Night held on June 1st, 2013. More information on all the videos and their awards is available at the Festival's Web site: http://fulldome-festival.de/