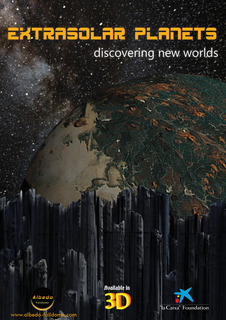 Albedo Fulldome together with Foundation ¨la Caixa¨ is happy to announce the release of a new fulldome film!

Read the full synopsis and watch the trailer and FULL FILM on line here: http://www.albedo-fulldome.com/drupal/en/extrasolar_planets

¨Extrasolar Planets – Discovering new worlds¨
Co-production with Foundation ¨la Caixa¨
Duration:  30 min.
Audience: general audience, families & school programs
Available now in: English, Spanish, Catalan, French (and soon German)
Technical data: 4K
Available in stereoscopic 3D
We live on a small planet that revolves around a star that is no different in size, luminosity, or location, than any other. It is just one among many.

Are the planets that orbit our star what distinguishes it from the others? Are there also extra solar planets that revolve around other stars? If that was the case, could it be that there are inhabitable worlds like Earth?

The endless variety of the Solar System is barely a reflection of the infinite diversity of the Universe. But, until now, we only know of one planet where life has developed… ours!