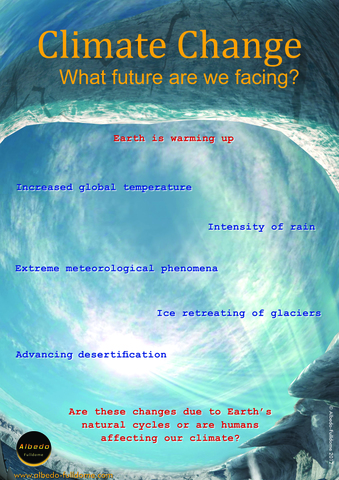 Albedo Fulldome is proud to announce the release of a new fulldome program; ¨Climate Change – what future are we facing?¨
Now ready for distribution worldwide through our distributors; http://www.albedo-fulldome.com/drupal/en/distributors

Get the full details, watch the trailer and FULL PROGRAM on line here: http://albedo-fulldome.com/drupal/en/climate_change

This program will entertain and educate with an easy-to-understand story about how our planet’s climate is changing. Through the immersive impact of fulldome, the viewer is plunged into a spectacular environment recreating landscapes and virtual scenes. From the examination of meteorological phenomena to the exploration of large natural spaces and weather conditions, fulldome provides a memorable way to learn about this highly topical and transcendent issue.

Content
There are disturbing indications that Earth is warming up; increased global temperature, variations in frequency and intensity of rain, extreme meteorological phenomena, ice retreating of glaciers and the North Pole and advancing desertification.

Earth experiences periodically altered climate, with periods of ice ages and warmth, even in the last millennium. Some scientists say these are natural periods with climate variations due to solar activity changes and orbital variations of the planet.

However, other experts claim that Man is primarily responsible for current climate changes.
In this sense, it was found that since the beginning of the industrial revolution there has been polluting gases detected and temperature rise across the globe.

Lately, the impact on Earth has taken on major proportions it seems. The massive use of fossil fuels (coal, oil), extensive breading of cattle, the disappearance of forests, and the great expansion of rice cultivation has skyrocketed the gases in the atmosphere; i.e. "greenhouse gases" such as CO2 and methane, with the possible effect of increase in global temperature.

The effects are already noticeable. If persisting, this trend may upset the natural system of distribution of heat on Earth, causing the total melting of Greenland and Antarctica, causing a significant rise in sea level that would flood coasts and coastal cities. Desertification that would vast areas could also be triggered causing the extinction of natural habitats, animal species and even indigenous populations.

Man must investigate and attempt to redirect these alterations caused to the global climate by using cleaner energy and conserve the ecosystems attempting to compensate for the emissions of greenhouse gases. This requires the involvement from every instance of society; political, business as well as individual.

Climate Change is addressed to a general audience.
It is perfectly suited for school programs and for family showings.